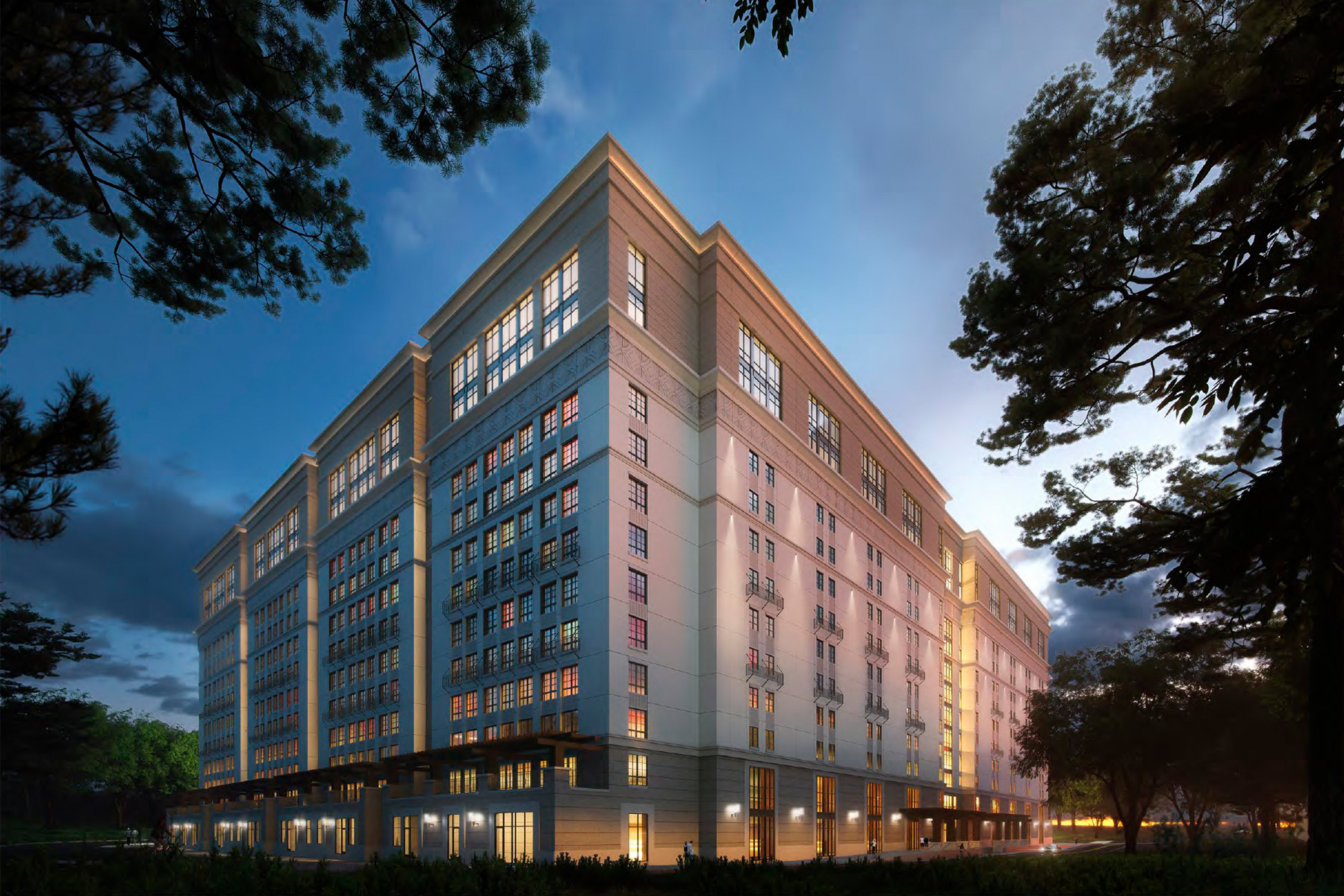 The Munger dorm is bad, but why?

Rarely has a single building proposal raised so many questions that go to the root of how architecture defines itself, as a discipline and a profession, as the proposed plans for the 4,500 people mega-dormitory “designed” by Charlie Munger – billionaire vice president of Warren Buffet’s Berkshire Hathaway – for the University of California, Santa Barbara.

Do we need windows in all habitable rooms, as many architects assume? Do we, as human beings, need these points of view? Should designers, regardless of their degrees, be as explicit in their social engineering as this dormitory is, which justifies thousands of windowless rooms by arguing for forced socialization?

Should a building be that big, especially if it consumes non-renewable resources, and should it be that big on prime real estate in coastal California? Does something so big have to be ugly? Should we treat students as customers in the lowest denominator or as potential talent to be attracted?

Contrary to what some claim, it meets all current codes (even windowless rooms). Munger could hand in this project for his licensing exam and pass with flying colors. That in itself is scary.

Finally, should someone with essentially unlimited money be allowed to circumvent the architecture licensing process de facto, if not in fact, and brag about their ability to do so?

I’ll leave the actual details of how and why the dorm design came about, and if it will be built, to some of the reporters who covered this story, including Fred Bernstein, whose excellent interview with the donor in Architecture file became the basis – often unrecognized – of many other works.

In short: Munger has offered UCSB more than $200 million to build this dormitory according to his plans, which will cost about $1.2 billion. The structure is a giant block in which almost none of the rooms have windows. Despite fervent opposition, including the resignation from a consultant, eminent architect Dennis McFadden, FAIA, from UCSB’s own design review board, the dormitory was completely approved by the university’s long-term development plan and will soon begin construction.

First, there is nothing illogical or illegal about the building. Contrary to what some claim, it meets all current codes (even rooms without windows). Munger could hand in this project for his architect registration exam and pass with flying colors. That in itself is frightening: if someone without training can not only brag about having beaten Le Corbusier (as Munger does in Bernstein’s interview), but can produce something that the profession, by its own standards, can’t find fault, what about the standards of the profession?

I think he is saying that architectural licensing is based on risk avoidance and service, not the pursuit of excellence or even the guarantee of a good building.

But what about this design? Let’s start with the most salient feature of the Munger dormitory: the absence of windows, masked by electrically lit panels, made necessary either by the size of the building and the desire to control costs, or, as its donor-designer claims, by the desire to bring out the students. from their rooms and in the “living room” areas also windowless and, beyond that, engaged in campus life. Can people live without windows? Of course we can – tens of thousands of prisoners do it every day. Also, many of us work in windowless spaces, and I suspect many UCSB students spend a lot of time in fluorescent-lit classrooms, also devoid of natural light and views.

Should a student live this way if the bedroom is just a place to sleep? Certainly, many architects, including Le Corbusier and Frank Lloyd Wright, have wondered why we don’t reduce bedrooms to sleeping machines and instead spend our resources on social spaces. But is it realistic? I do not think so. It is exactly the ability to connect one’s most private sphere to the larger social environment, both through perspective (views) and environments, that makes the bedroom more than a place to be with your eyes closed. . The current trend towards ever more luxurious and larger college bedrooms, however, raises questions in other directions – do we want college dorms to be versions of the suburban house? – but the alternative is not a windowless cell. We all need and deserve windows.

This is especially important if we understand the college experience as the model or transit ground for future community in the way that the American campus has traditionally provided. Constructing a social experience through the building blocks of rooms, dorms, lobbies or floors, dorms, quads, and campuses is precisely what provides an alternative model for how our spaces residential and commercial could be developed. These spaces should be stages on which we live as critical actors in our society that we all deserve to be.

The current trend towards ever more luxurious and larger college bedrooms raises questions in other directions, but the alternative is not a windowless cell. We all need and deserve windows.

It’s ironic that not only will the construction of Munger Hall require the demolition of a number of low-density dormitories that provided these benefits in spades, thus already wasting resources; and that the spectacular site stands on a promontory between the Pacific Ocean and a lagoon. One of the great things about the UCSB campus is how students can have a direct relationship with the larger landscape, although the isolation of the campus next to a very expensive community removes many chances of relationships with a larger man-made one. countryside. Munger Hall is not a building that represents the “genius loci”.

All of these good aspects of this and other campuses, and the complexity of the traditional dormitory, are inefficient and expensive: building structures with windows, not to mention character, and then organizing them into campuses whose layout, including courtyards and other public spaces, bringing together students, faculty and staff costs money. This is the main justification for “dormzilla”. Packing 4,500 students into a single building is certainly a compact use of resources, even if its construction begins with dumpsters full of rubble from demolished structures. The university needs more housing and does not have enough money to build them. If building the Munger dorm meant that UCSB was made more accessible to a wider range of students, would that justify the design compromise? No, for the same reason that poorly constructed skyscrapers as storage systems for the poor only exacerbated social divisions. Treating students like prisoners does not exactly welcome them into the possibilities that the university system is supposed to open up; rather, it communicates that they only deserve what we have deigned to give them.

Finally, and perhaps trivially, there is the sheer ugliness of the building. On its scale, it would be hard to be anything else, but the sprinkling of vaguely Spanish colonial details scattered around the structure, the utter repetitiveness of the spaces, and the naughtiness of the materials involved in the renderings are horrifying. Munger Hall is every Type 3 repository of life crammed into stucco-covered boxes towering over single-family neighborhoods that have infested all of our cities, but blown up on a gigantic and disturbing scale. This is your future, children of UCSB – not an openness and awareness of the complex human relationships that build community; no lasting relationship with the landscape; nothing open or complex at all. Just storage in residential warehouses.

The problem is that despite these arguments, there is the fact that, as large as the building is, it is indeed the most efficient way to create a college dorm. This very fact raises the biggest question of all: how can we, as a society and as a discipline, justify anything more than such bare minimums as offering anything more than luxury? In other words, how can we establish a compelling case in which the values ​​and standards I have outlined above are worth investing in? Clearly, the profession hasn’t done a good enough job in this regard, even though the local AIA has sentenced the building – and the ultimate failure of Munger Hall is that the institution’s board of trustees, faced with a large donation with no compensating public funding for an alternative, had no choice but to accept the design and money.

Munger Hall is an abomination. I can only hope that other universities will continue to understand the need to invest in human-sized, human-centered and community-supporting campuses that will help students learn to be part of an open world, durable and beautiful, and that the discipline will learn from this case to better define and communicate the true value of architecture.

The opinions and conclusions of this author are not necessarily those of ARCHITECT magazine or the American Institute of Architects.