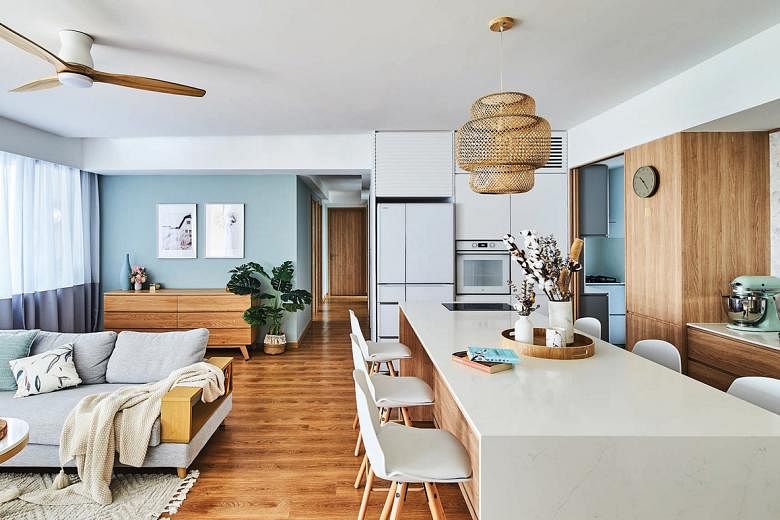 SINGAPORE – Returning to interior designer Mark Chen of the local Artistroom studio for the appearance and renovation of their second home was an easy decision for Mr. Kevin Wee and Ms. Serene Mai as he had helped them renovate their home. first house.

The brief for the second home – a 1,400 square foot executive condominium apartment in Serangoon North – called for a Scandinavian-bohemian look that provided for the daily routines of the couple, who are almost 30 years old and have a seven-year-old daughter. .

The quality of the materials, such as the laminates and the quartz surface, was a priority. â€œThese determine the lifespan of our household furniture in the long term,â€ says Mr. Wee, who declined to disclose his craft.

The renovation, which cost around $ 80,000, took eight months because of the circuit breaker, so the family didn’t move in until September 2020. But the end result was well worth it: an airy and bright, dressed space. both earthy neutrals and warm tones, with enough room for the activities the couple enjoy. Ms. Mai decorated the house with accessories from Taobao for the finishing touch.

Mr. Chen had this to say about the design and appearance of the house.

What were the priorities in the specifications?

Along with the Scandi-Boho look, the home owners also wanted separate wet and dry kitchens and a long island because they love to cook and hold meetings.

Has the house been significantly reconfigured?

Yes. The original layout included a common bedroom and a closed kitchen with a courtyard. Since the owners wanted separate wet and dry kitchens with an island, we decided to remove one of the existing bedrooms closest to the living room to make room.

A large kitchen island was on the brief. What were the design considerations?

Condominium Associations File Lawsuit Against Village of Glenview Over Proposed…