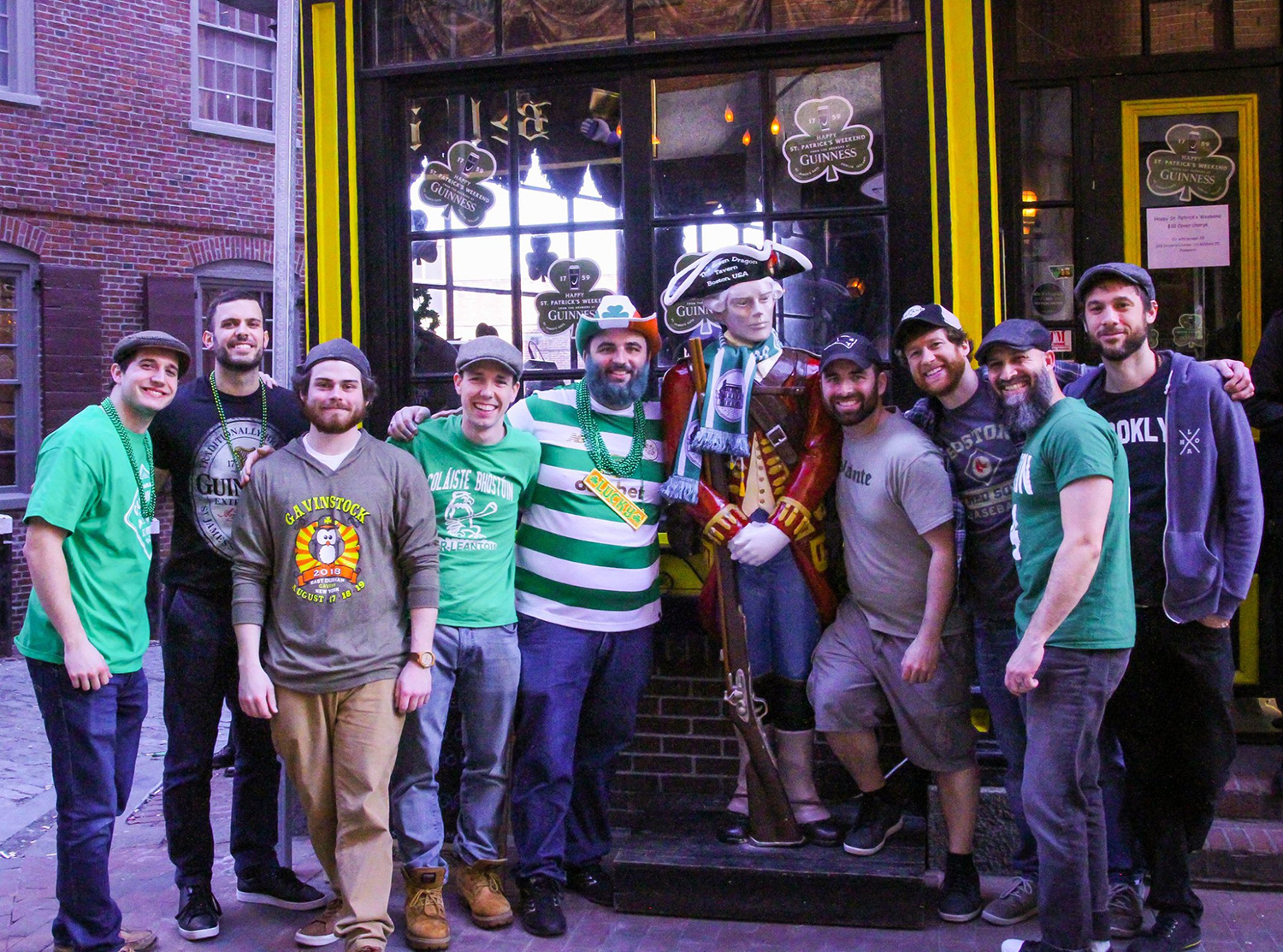 Born in a dorm in British Columbia, Sláinte the band takes its sound around Rte 95

Sláinte the group, expressing joy and brotherhood, is where their music is found: born in a Boston College dormitory, the “club” now takes its sound to Rte. 95

We’ve all heard the phrase at least a few times, usually said among friends and acquaintances in a pub, at a wedding or funeral, and just about any occasion or social situation that involves lifting a glass: “Sláinte”.

Its popular translation from Old Irish is “cheers”, as if to wish good health, deriving from the word slan, which means “healthy”. There are, however, other connotations, such as “freedom” – from illness (a clumsier way of saying “good health”) but also from responsibility, which may be a fortuitous wish, depending on the circumstances in which the phrase is pronounced.

“Sláinte” is also the band’s name Boston-area resident Jon Harrington and his brother James helped found it several years ago when they were students at Boston College. The band – who describe their music as “somewhere between Irish folk and Irish punk, with lots of rock/country covers mixed in to keep things fresh” – have become a staple of Greater Boston/Eastern borough pubs. Massachusetts like Mr. Dooley’s, The Black Rose, The Dubliner, The Cottage Bar & Restaurant and Cape Cod Irish Village, and even further, as one of its members lives in New York.

For Jon Harrington and his bandmates, Sláinte – the band and the expression – is a literal expression of good humor and camaraderie, and an opportunity to have fun and make music without worrying too much about fame and fame. fortune.

One of the main characteristics of Sláinte is a somewhat amorphous composition: technically there are 11 of them, but Harrington notes that “we are all rarely in the same place at the same time”. The group is made up of three components, including its “Céilí Band”, which includes the Harrington brothers – Jon on violin, James on whistle and harmonica – Pat O’Donovan (mandolin, banjo, accordion, vocals) and Stephen Sunshine (banjo, bass guitar, vocals). Sláinte features a quintet of “guitarists,” both of the acoustic variety (Brady Conley and Zack Bolles) and electric bass (Steve Smith and Andrew Rodriguez) as well as electric bass (Mike Perillo); all provide lead or backing vocals. The “Drumline” is Kevin Smith and Ed Cardenas, both of whom could be on hand if the gig calls for it.

“I think Sláinte is more of a club than a band,” says Jon Harrington, who like most of his mates has a full-time job. he works with tax software. “We don’t have big ambitions and we’re too chaotic to be taken seriously anyway – our ‘group model’ is probably not the right one to become famous. But if we can choose one way to spend a Friday night, playing like Sláinte, that’s it.

Sláinte has now captured his unique personality on a recording, “Up Down 95”. The 10-track album includes covers of the classic Irish pub rock genre: The Pogues (“Streams of Whiskey”), Flogging Molly (“Drunken Lullabies”) – both in canonical 2/4 – and The Saw Doctors ( “Joyce Country Band Ceili”). On the folk/rock side of the spectrum are renditions of Bruce Springsteen’s “Atlantic City” and Frank and Seán O’Meara’s moving “Grace,” which evokes the wedding of 1916 martyr Joseph Plunkett just hours before its execution.

Their setting of the traditional “The Musical Priest” coil, meanwhile, offers what Harrington considers the essence of Sláinte’s sound: fiddle, whistle, mandolin and acoustic guitar start the track, along with electric guitar and the battery joining in a second time. around; then the acoustic and electric guitars do solo improvisations on the drums while the other instruments fade out, reappearing at the end for a final round.

“I think, whatever our lineup is, it’s kind of a signature for us,” Harrington says of the track. “We’re always looking to bring together trad/folk and rock: we’ll do a violin piece with a guitar solo, and we’ll do ‘Johnny B. Goode’ with a violin solo. We like to combine these different types of energy into one.

Another aspect of the band, their recent songwriting venture, is highlighted on the album with four originals, each written by their respective vocalists. Conley’s title track is a brilliant R&B-flavored ode to this Boston-New York route, a route the band travels a lot: “Up down 95 now/Hey, how you feel now?/Up down 95/We’ J ‘ll get there one way or another.” Bolles’ “Irish Whiskey” straddles the Irish pub/country rock vein, thematically and otherwise, and is enriched by guest vocalist Annie Cheevers; Smith’s philosophical “Ember” goes along the same lines, with a recurring lead guitar riff that gives it weight.

Perillo’s “Boston Girl Who Fled to New York” is a kind of urban diary tale with a nostalgic undertone, about the impression a frequently encountered acquaintance can make on you (“She’s eclectic/That’s what people say/When they don’t understand/All the things she tries to say”), with an anthemic chorus and an interpolation from the O’Carolan song “Sheebeg and Sheemore”.

“There was nothing intentional about creating our own songs,” says Harrington. “During the pandemic, guys were sitting around writing, because there wasn’t much else to do. So when we started planning the album, we asked ‘Who’s got rockin’ songs?’ I think “Boston Girl” really hit the right chord – it tapped into a lot of what we felt during this time of COVID.

“The album actually captures the last few years really well: from before the pandemic, when we were outside and playing regularly, and then – like pretty much everyone – we had to fall back and try to stay together . I think we all kept music as a way to accompanies us until such time as things might return to some degree of normality.

Hailing from Winchendon, the Harrington brothers fell in love with Irish music, through their Irish-American family – and in particular their grandfather, who played with a band called Jug O’ Punch in pubs around the New England. But Jon and James didn’t really start playing seriously until they moved to British Columbia and signed up for the music offerings of the Irish Studies program: Jon took lessons with violinist Tina Lech, while James learned the whistle with Jimmy Noonan.

“I loved learning the violin with Tina,” says Jon. “I couldn’t get enough. I listened to tunes on my way to class whenever I could: jigs, reels, polkas, all that.

While at the Heights, the Harringtons met O’Donovan — also in Lech’s violin class — and decided one day to see what it would be like to play for a crowd. So they brought their instruments to a party on campus and, without a sound system, made six songs; one was “Shipping Up to Boston” by the Dropkick Murphys, which they ended up playing as an encore. Several times.

In time, fellow BC undergraduates Perillo and Conley were recruited, and the fledgling group practiced in Harrington’s bedroom in the Voute residence hall. “At first we didn’t really know what to do,” he recalls, “so we would bring in Dubliners and play with them. At one point it allowed us to push the Dubliners back and play alone. Sláinte was gone and rolling.

Conley’s move to New York in 2017 created both a challenge and an opportunity. On the one hand, this meant having to recruit other members to meet the needs of the lead singer, but thanks to Conley – who found other musicians in his new surroundings – the band was able to gain a foothold on the new pub scene. -yorkers. Essentially, as Harrington describes it, there has been a “Sláinte North” and a “Sláinte South” which each use a combination of all 11 members.

“At the end of the day there is a Sláinte sound, but at the same time I think this arrangement creates two different styles in the band, which you can hear on the album: one part is quite raw, and with a part, there’s a more artistic dimension,” says Harrington. “It’s about experimenting, seeing what works, and building on that.”

Harrington is nothing if not fact when it comes to discussing Sláinte, past, present and future. The band is built for the frenzied pub scene, and they like it that way. The age range of members is mostly in the late twenties to early thirties, so there are a lot of young people. But going forward, there are bound to be work- and family-related decisions that affect what time, if any, can be spent on musical pursuits.

“Some of us will definitely have to figure out the next chapter before long,” he says. “But we really appreciate what we have: we’re all friends who just make great music, and now we have an album we’re proud of. With everything going on in the world, it’s not a bad place to be.

For more about the band and “Up Down 95”, visit slaintetheband.com