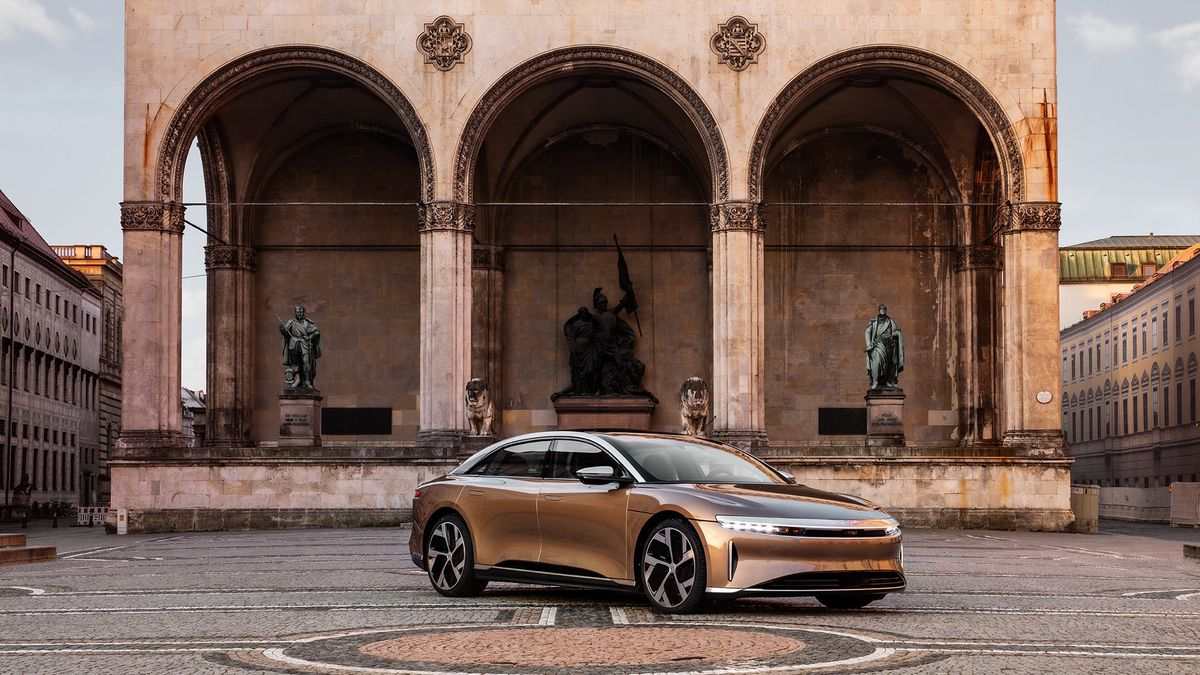 Celebrations for the opening of Lucid’s first European studio are underway at Odeonsplatz in the heart of Munich’s Old Town. The Studio is a watershed moment for the EV brand, and no doubt calculated to place the luxury EV cat among the established German pigeons. Mercedes and Porsche are both based a few hours away, while Audi in Ingolstadt can be reached in less than an hour. BMW, headquartered in Munich, is practically around the corner.

Additional Lucid studios are set to open in Germany, the Netherlands, Norway, and Switzerland in 2022.

More Dream Editions
Lucid is celebrating its entry into Europe by offering existing reservation holders the option to upgrade to a Dream Edition Lucid Air. A Lucid source told us that all European Air shipments, including Dream Editions, will be new releases. Here is what the press release says:

Building a handful of additional Dream Editions could very well rub off on people who have invested $170,000 for an untested electric car. There were whispers like that when the almost but not quite as powerful Performance Grand Touring was announced with 1050 horsepower. It remains to be seen how this will play out in terms of public relations.

Rates & Deliveries
The Dream Editions will be priced at €218,000 in Germany, €222,000 in the Netherlands, CHF199,000 in Switzerland and 1,850,000 crowns in Norway with first deliveries expected in late 2022. The price difference between Germany and the Netherlands is because of the different tax rates of the nations.

“The expansion into Europe and the decision to offer Lucid Air Dream Edition in this market strengthens Lucid’s position as a global brand and further supports our mission to raise the standards of the electric vehicle industry. The first offering from the company, Lucid Air Dream Edition, offers 0-100 km acceleration in 2.7 seconds or an estimated range of 900 km * on a single charge, as well as a 924 V electrical architecture for impressive fast charging – all the performance, quality, and range that makes it perfectly suited for the European market.- Zak Edson, Vice President of Sales and Service, Lucid

Still to come
Lucid will offer the full line of Pure, Touring and Grand Touring Lucid Airs in Europe with pricing to be announced later this year. The Air Pure is currently priced from €100,000 for Germany and the Netherlands, CHF 100,000 for Switzerland and 1,000,000 crowns in Norway.

Lucid is currently accepting bookings at €300 per person in Austria, Belgium, Denmark, Finland, France, Italy, Monaco, Spain, Sweden and the UK. A right-hand-drive Lucid Air is planned for the UK.

Related story: Lucid Motors is expanding to where?

James Walker is an automotive journalist at Torque News focusing on Lucid Motors. If he has wheels, he’s interested and he can’t wait to see what kind of cars the electric vehicle revolution will bring us. Whether it’s fast, slow, new or old, James wants to take a look and share it in print and video, ideally with some twisty roads involved. You can connect with James at TwitterInstagram and LinkedIn.

A Freshman’s Guide to Dorm Essentials at UNC