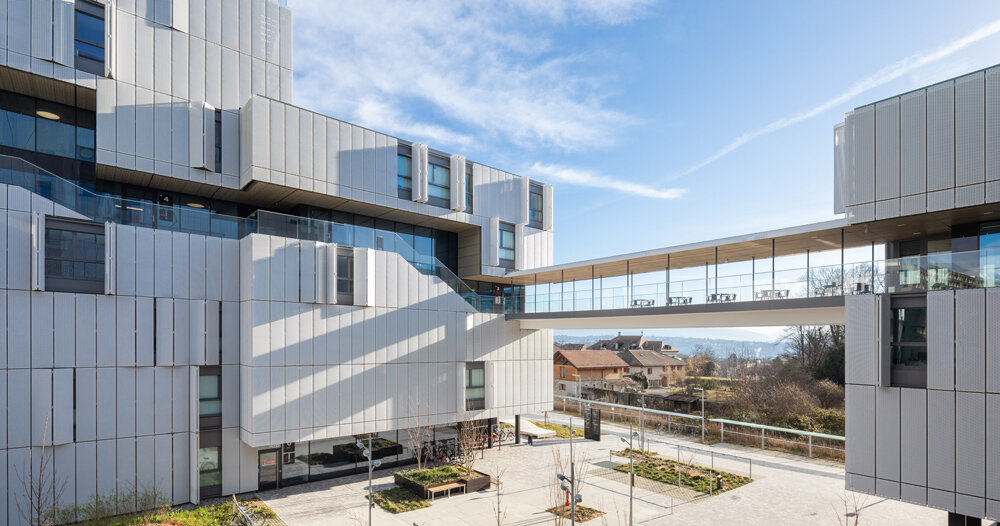 kengo kuma & associates have completed their grand morillon student dorms, unveiling the design with photography by vincent hecht. the structure is the result of a winning application announced in 2017, organized by the higher institute of international and development studies (IHEID). located in geneva, switzerland, the luminous project takes the form of a group of volumes that have been “cut out” to reveal a continuous pedestrian promenade that crosses and integrates shared community spaces along the way.

kengo kuma & associates (see After) design the student dormitories of the grand morillon to emphasize the dialogue between the community and moments of intimacy. the project houses 700 beds for IHEID students. while offering these different types of apartments for private retreat moments, the team understands the need for spontaneous student interaction when moving between dorms and classrooms.

rather than linking the building to vertical circulation, relying solely on lifts, the ribbon-cut promenade ensures that students will have these points of meeting and engagement along the way. a natural community is thus promoted alongside private apartments so that students are not isolated.

Morillon’s large dormitories designed by kengo kuma thus integrate common areas at all levels. the design team rejected the typical layout that sees shared areas on the lower levels with designated apartments on the upper levels. this can lead to a sense of isolation as community spaces are not traversed naturally. instead, common areas – including communal kitchens, laundry rooms, sports facilities, library, study areas, cafeteria – are scattered throughout the buildings, linked directly to the sculpted pedestrian promenade. inside, the spaces are organized with warm wood to contrast the gray and white tones of the facade. 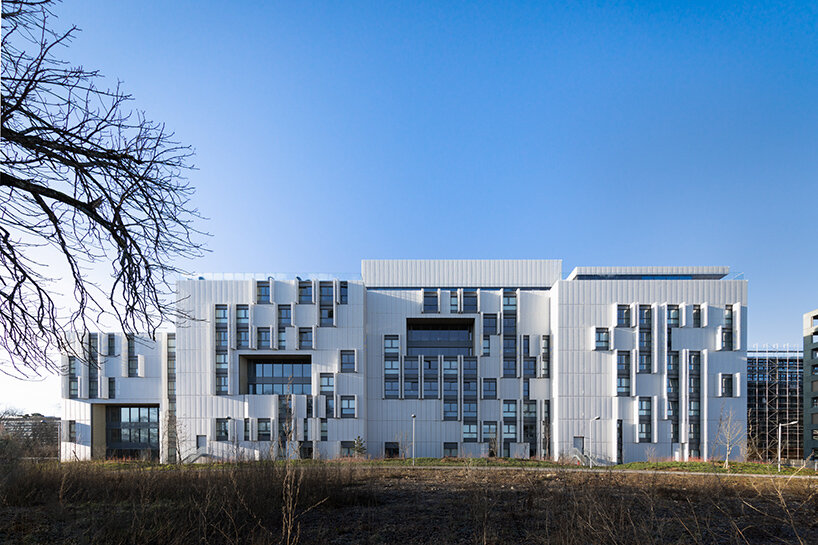 designboom speaks with Javier Villar Ruizpartner in charge at kengo kuma & associés, to learn more about the spirit of this complex project. the architect begins by describing the ambitions and challenges of the project.

‘this project began as part of an international competition. our initial proposal was so ambitious that this project could well have ended up being one of those contest entries appreciated for its surprising twists but ultimately not selected to move forward. the proposal was based on a series of solutions which were not, by far, part of the requirements. we were aware that, even if we gave the customer what he needed, it was not necessarily what he asked for.

‘in this project, we wanted to question the usual segregation of the program which places the public facilities on the ground floor and the residential units above; a typology that relies heavily on the use of elevators. instead, an ascending promenade, as a new type of public space, would allow pedestrian access to all floors and activities, from the ground floor to the rooftops.

“students going to their apartments or to the facilities, going down to the street or up to the rooftops, would use this public space as the main way to navigate and experience the building. all this to make this project a place that encourages a more conscious way of life of walking that provokes encounters between its inhabitants, offering a community experience to all those hundreds of students, all of very different origins, who will live here for the years to come.’ 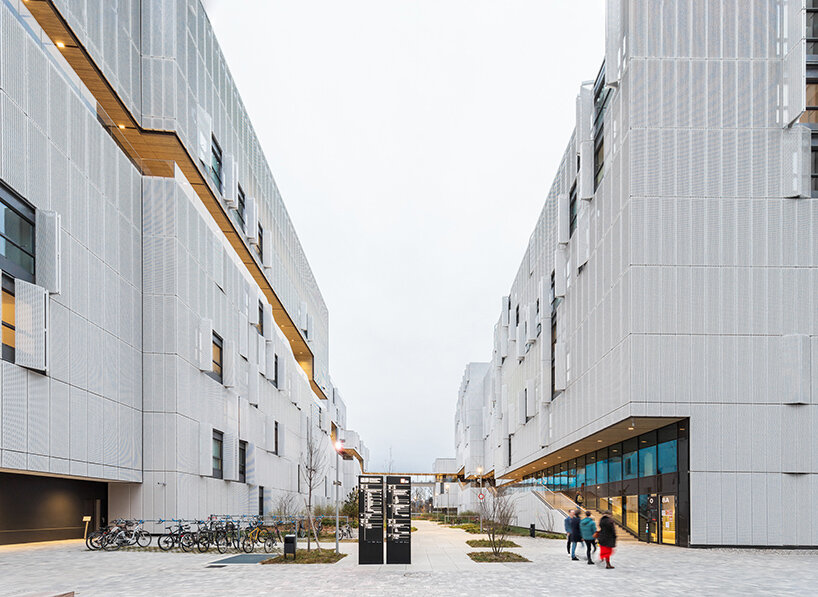 the warmth of the wood contrasts with the bright facade

“we imagined this promenade carved into the architecture, as an essential part of its expression, not appearing as an afterthought. on its upward journey, this linear and ever-changing void, like a confident stroke of calligraphy, bursts into the rational organization of the cells of the apartment. but despite this organic upheaval, the promenade articulates and gives meaning to the whole. apartment cells strictly follow a 2.8 meter grid.

‘Each apartment module is surrounded by two openable windows which are protected by 4 foldable wire mesh screens. the 70 centimeter module of these screens completely envelops the different volumes, defining their widths, heights and interlockings. when the grid of façade screens arrives at the void of the promenade, its lines continue meticulously into the divisions of its ceiling and floors that continue into the interior spaces organizing its lighting arrangements, wall finishes and built-in furniture.

‘it is a project that has been designed to be coherent at all scales… from the structural grid to the divisions of all the interior arrangements. a design that involves the complexity of being both rational and organic, brutalist and meticulous, warm and cold. 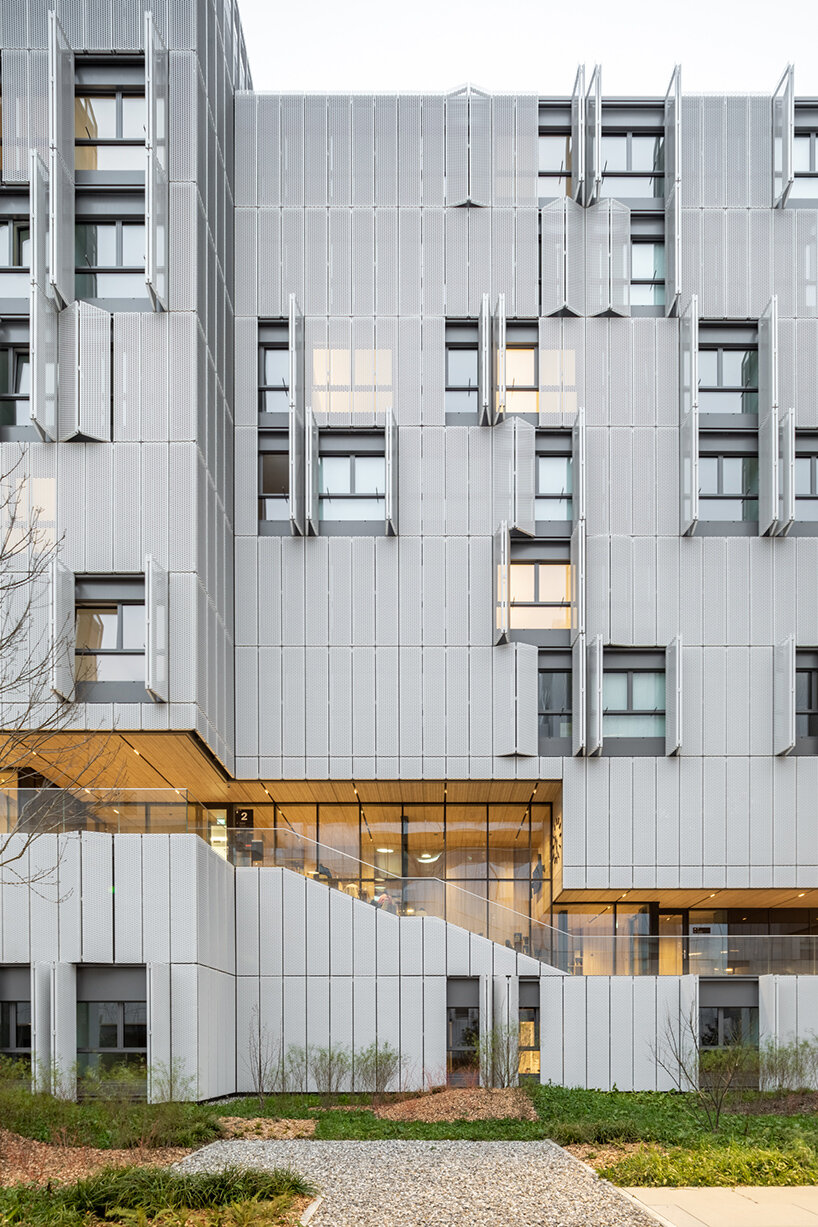 challenges posed by an ambitious design

‘ such ambitions and challenges raised many questions, both at the time of the competition and during the development of the project and its construction:

“Would the client take up the challenge of such a new kind of operation where the public and the private are completely intertwined? would the engineers find reasonable ways to keep the promenade free of structural and mechanical elements, to be fully open to the outside as we imagined?

would the construction company succeed in erecting such a complex building, respecting its principles at all its scales, from the audacious superstructures to the delicate millimetric coincidences in the cutouts of the finishes? would the local team commit to discussing with the authorities to propose solutions that are not presented in the books but necessary for such a particular architecture? and would all parties involved be ready to make sure it all happens in the best possible way in terms of quality, time and budget?

‘As in all projects, and especially in difficult projects, the whole process is not an easy road to walk. but in this case, it was particularly exciting, even surprising, to see how all these questions and uncertainties were resolved one by one, revealing the common ground of all parties involved. without a doubt, this is one of those projects that would not have been possible without the complicity, commitment and goodwill of a large group of professionals, all of whom believe in the good that this project will bring. 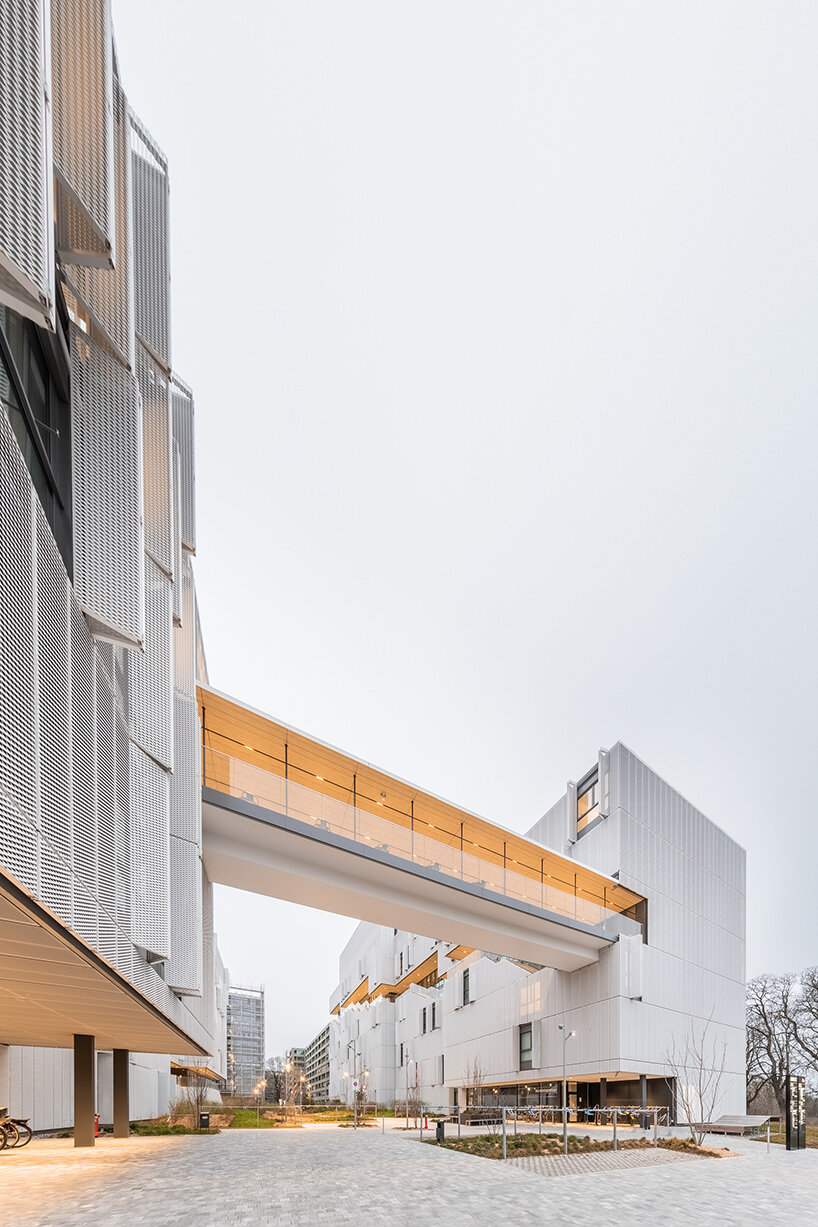 the group of buildings is connected by a walkway, extending the promenade

the four realms: creating a sense of community

javier villar ruiz explains how the four kingdoms – the privatethe collectivethe commmonand the public – are intensely intertwined, but not mixed.

‘most of the mass of this building is composed by approx. Studios and student apartments with 700 beds forming a rational and modular volume strictly following a 2.8 meter grid. expanded metal mesh shutters allow students living inside to adjust their privacy level at all times – as well as the amount of natural light and breeze. it is very exciting to see how the facade constantly changes depending on the operability of these shutters through the different times of the day or seasons of the year.

despite the rationality of this part of the volume, its facade becomes an expression of the life of the students inside. hollowed out in this rational volume, the collective activities are placed along a public ascending promenade that goes from ground level to the roof. anyone visiting the site is allowed to climb to the roof to enjoy the fantastic panoramic view of the surrounding mountains and lake.

‘indeed, these activities and the promenade itself are designed together, appearing as a negative space that splits the mass of the volume in two.