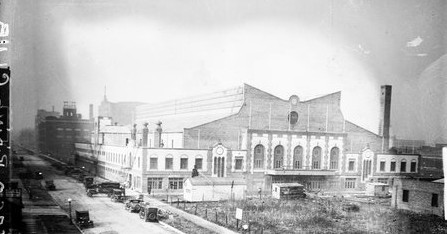 History of the Chicago Riding Club: opening, closing and future of the historic building

In 1924, Chicago’s roads were crowded with cars, streetcars, and even bicycles. The riders – many of whom are wealthy – could either try their luck avoiding traffic or take their horses to city parks.

But that all changed on December 17, 1924, when the Chicago Riding Club opened to the public. During its life, the building underwent several transformations, moving from an exclusive equestrian club to a public ice rink and finally instead of a historical debate. It may be gone now, but it is certainly not forgotten.

The new club, located at 630 McClurg Court between Erie and Ontario, would be “the first building of any size to be erected in Chicago exclusively for the use of horse riders,” writes the Daily News. Its stalls housed 460 horses and the arena could accommodate 5,000 spectators. In addition to polo matches, the club would host horse shows and steeplechase.

To provide riding lessons, the club brought in Russian refugee Demitry Ivanenko, who once served as honorary captain of the late Tsarina regiment, according to the newspaper. Before World War I, he participated in international equestrian events as a Russian representative and in an Olympic horse show in London (possibly the 1908 Olympics).

The opening ceremonies included an “indoor game of polo, an exhibition of saddle and riding horses and” horseback riding to the sound of music “,” the newspaper said. Some of Chicago’s elite residents, such as John Borden and the club’s new president, Col. RR McCormick, would play in the game.

For 12 years, the Riding Club provided a safe space for horseback riding in the city as automobiles and streetcars took to the streets, but the Great Depression halted the club’s growth. Then, on April 3, 1936, the Daily News announced a new development for the property.

“The Chicago Riding Club, 333 East Erie Street, has been converted into a general sports and exhibition center under the direction of the Chicago Arena Corporation and will in the future be known as the Chicago Arena,” the newspaper said. .

Management quickly increased the building’s capacity, according to the newspaper, and installed a new interior lighting system. The clay floor remained so that polo matches and horse shows could still be held in the space, as well as indoor tennis and softball games.

For nearly two decades, the Chicago Arena has hosted smaller groups on stage. In January 1940, the American Legion’s Board of Trade Post announced it would hold its ice carnival and arena skating review in March, the Daily News wrote. “The winners of the National Ice Championships in Cleveland will be on hand for the show, along with a galaxy of international stars.”

Other acts of ice followed. The Ice Capades and Ice Follies welcomed the public in the spring and fall, respectively, between 1940 and 1953. Amateur hockey leagues also played at the arena, but they disbanded before the start of the Second. World War. For a time, the arena housed the city’s only public ice rink, as well as two restaurants.

Of course, the rink should go out. Atlass said plans for space always remained fluid, but he hoped to air one hour of a three-hour morning show, with the other two hours coming from a show in New York City. Some shows on the network could also move to Chicago, he added.

The building first became known in 1960 for hosting the first televised Presidential Debate between Senator John F. Kennedy and Vice President Richard Nixon. It was later demolished in 2009 to make way for the Shirley Ryan AbilityLab, which treats patients in need of long-term care and rehabilitation.