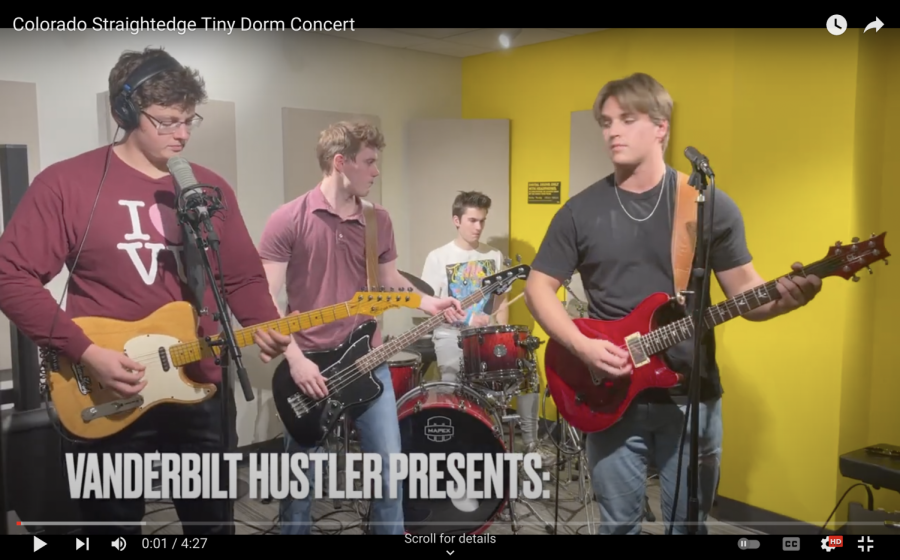 Vandy’s own rock band, Colorado Straightedge, turn up the volume on our Tiny Dorm Concert Series with their performance at Vanderbilt Recording Studio.

First released in 2020, Colorado’s single Straightedge “oceans” has garnered over 34,000 streams on Spotify so far. The song came from their inspirational boom related to the COVID-19 lockdowns, during which the members would send audio files back and forth to each other. Their success jumped from there, amassing streams and play locations (once restrictions were lifted) that included Vanderbilt football games, fraternity parties and other school events.

“We all met in freshman year, we all lived in Stambaugh,” lead and junior vocalist John Abbott said. “Matt and Nick were actually roommates.”

This long-term family bond between the band, now all Vanderbilt juniors, is reflected in their laid-back attitude towards each other and their all-encompassing approach to music. The band’s name comes from the idea of ​​someone who is mostly “straightedge” but dabbles in counterculture.

None of the members major in music, but some have enrolled in music lessons at Blair related to their goals for the group. “Since Pierce enrolled in this [African drumming] class, our stock has gone up,” said bassist and junior Matt Geleta.

The band’s releases reflect inspirations from across the musical spectrum, from blues to modern indie-pop to fluid surf rock. Their most recent track is “Stay at home‘, which was released on April 8. The track romances lazing around with its significant other, a fun and upbeat single that follows the band’s previous releases. Their goal as a band is mostly to play more gigs.