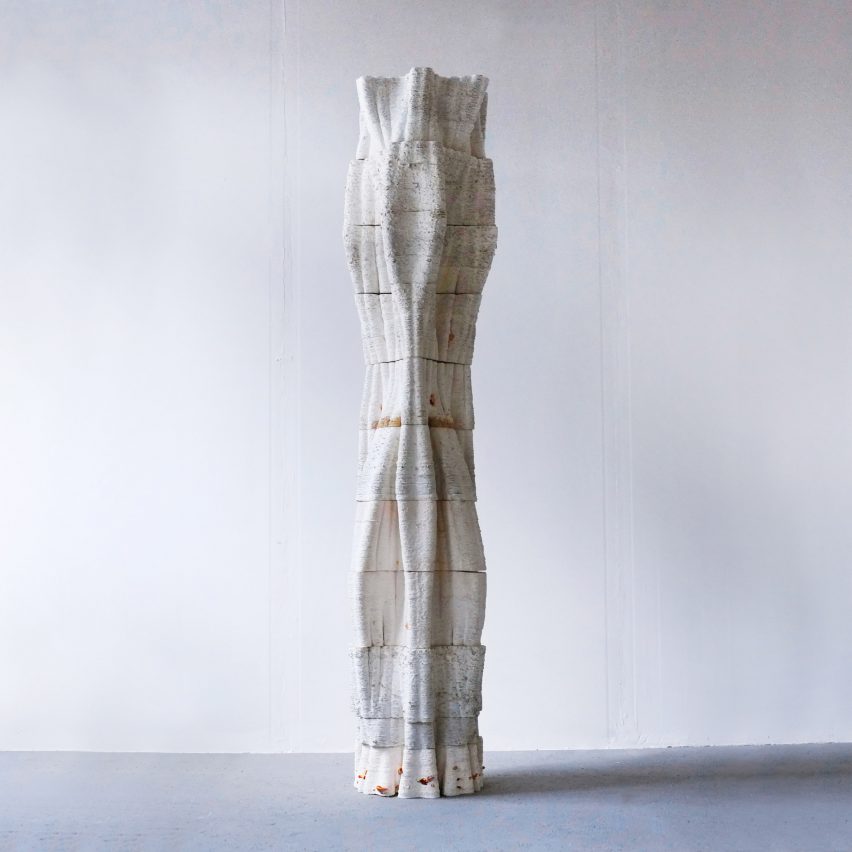 Insiders and analysts predict the 3D printing trends to watch in our latest series of articles focusing on the future of 3D printing.

London design studio Blast Studio has developed a new method of 3D printing with mycelium, the vegetative root of fungi, and used it to 3D print a living architectural building column.

Named the Tree Column, the biomass structure is over two meters tall and has been algorithmically designed to provide both the strength and growth conditions necessary for the mycelium.

According to Paola Garnousset, co-founder of Blast Studio, the idea was to create a versatile structure that could be harvested for mushrooms while also serving as a functional building column.

She told Dezeen: “Our vision is to launch a new kind of living architecture that could self-repair and be harvested to feed people. The idea would be to 3D print a living structure in situ, which would be inoculated with different varieties of fungi, some with high structural resistance and others delicious.

The design studio hopes to scale the unique project and eventually 3D print a large pavilion and entire buildings, enabling urban environments that actually nurture the people who live there.

How was the column tree created?

To 3D print the tree column, Blast Studio started by shredding used coffee cups, boiling them, and mixing the paper pulp with mycelium to create a printable biomaterial. The biomaterial was then fed into a custom extrusion-based 3D printer to produce ten individual column modules. When stacked on top of each other, these modules form the tree column.

Interestingly, the geometry of the structure has been generatively designed with a series of micro-pockets that work to trap moisture. These areas allow the mycelium to grow and grow.

Garnousset explains: “For the mycelium to grow well, it needs a humid environment sheltered from drafts, such as in the undergrowth where it grows naturally. We were inspired by cacti shapes that can grow successfully in the desert by capturing moisture from the wind and creating shade in their recesses.

Mushroom growth is also facilitated by paper cup pulp, which is used as a source of nutrition. Over time, the mycelium consumes the shredded goblets and takes over the column, at which point it can begin to produce edible mushrooms.

From food source to building block

Once the column performs its function as a food source, it can be dried at high temperatures to kill fungi and solidify the structure into a load-bearing building element. Blast Studio says the final, dead biomaterial will be similar to medium-density fiberboard (MDF) in terms of strength, while also offering insulating and fire-retardant characteristics.

“The column is very light and good in compression and flexion thanks to the elasticity of the material”, adds Garnousset. “In small constructions such as houses and small buildings, concrete could be replaced by mycelium.”

Importantly, when the tree column reaches the end of its life, it can be recycled and simply reprinted. Blast Studio is developing a self-healing version of the structure – one that still contains living mycelium that can grow back over cracks to cover any external damage. The design studio’s immediate next steps involve 3D printing a large tree pavilion by the end of the year, which will include several columns of trees.

The freedom of design offered by additive manufacturing makes this technology an excellent choice for abstract architectural applications. Most recently, Swedish architects David Andreen and Ana Goidea designed and 3D printed the Meristem wall, a 1.25 x 2.1 x 0.7 m structure that incorporates several functional features. This includes piping for electrical wiring and water flow, a complex ventilation network, and a computer-optimized surface structure that allows the wall to serve as an urban wildlife habitat.

Looking for a career in additive manufacturing? Visit 3D printing works for a selection of roles in the industry.