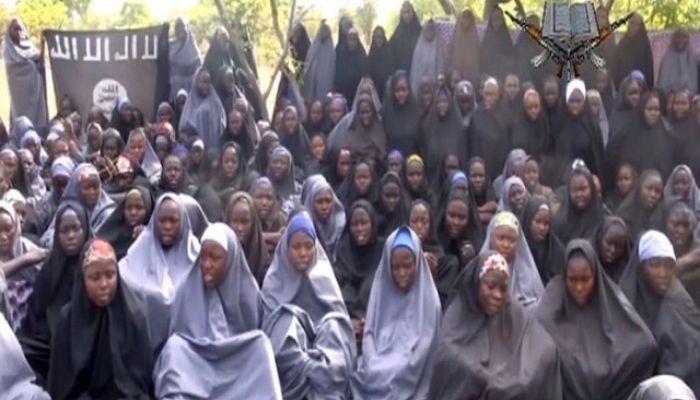 On the night of April 14-15, 2014, 276 mostly Christian female students aged between 16 and 18 were abducted from the Government Secondary School for Girls in Chibok, Borno State, Nigeria, by the Islamic terrorist group Boko Haram.

Fifty-seven of the schoolgirls escaped immediately after the incident by jumping from the trucks they were being transported on, and others were repeatedly rescued by the Nigerian armed forces.

May 4: Then Nigerian President Goodluck Jonathan spoke publicly about the abduction for the first time saying the government was doing everything possible to find the missing girls.

He accused the parents of the victims of not providing enough information about their missing children, saying they were not cooperating fully with the police.

May 5: Boko Haram leader Abubakar Shekau claims responsibility for the kidnappings. Shekau claimed that “Allah commanded me to sell them…I will carry out his instructions” and that “slavery is permitted in my religion, and I will capture people and make them slaves”. He claimed the girls should not have been in school and should have been married off instead, saying girls as young as nine were suitable for marriage.

May 24: after President Goodluck Jonathan met with US, Israeli, French and British foreign ministers in Paris, where the consensus was that no deal with terrorists should be made and that a solution based on force was needed.

On May 26, the Nigerian Chief of Defense Staff announced that Nigerian security forces had located the kidnapped girls, but a forceful rescue attempt had been ruled out due to concerns about collateral damage.

On May 30, a civilian militia found two of the kidnapped girls raped, “half dead” and tied to a tree in the Baale region of northeast Nigeria. According to villagers, Boko Haram abandoned the two girls and killed and buried four other disobedient girls. Later that year, four more girls escaped, walking for three weeks and reaching safety on October 12. They claimed to have been raped every day in a camp in Cameroon.

On June 26, thehill.com reported that the Nigerian government had signed a contract worth over $1.2 million with Levick, a Washington, D.C.-based public relations firm, to work on “the international and local media narrative” surrounding the kidnapping of Chibok schoolgirls.

On July 1, a businessman suspected of being responsible for the kidnappings of schoolgirls as well as the bombing of a busy market in northeast Nigeria was apprehended. According to military sources, he was also accused of helping the Islamist militant group in the assassination of the traditional leader Idrissa Timta, the Emir of Gwoza.

According worldwatchmonitor.org, Stephen Davis, a former Anglican clergyman, contacted three Boko Haram commanders who said they might be willing to release the Chibok schoolgirls and traveled to Nigeria in April 2015.

He was shown proof of life (a video of them being raped) and told that 18 of them were seriously ill, some of whom had HIV.

In January, the Nigerian army freed 1,000 women and girls held captive by Boko Haram in the village of Boboshe, but none of them were Chibok girls.

Boko Haram released another video in April showing 15 girls who appeared to be Chibok girls, at which point at least 219 of those kidnapped remained missing.

Amina Ali Nkeki, a schoolgirl from Chibok, was discovered on May 17 in Sambisa forest by the civilian vigilante group Joint Task Force, with her baby and Mohammad Hayyatu, a suspected Boko Haram militant who claimed to be her husband.

On May 19, she met Nigerian President Muhammadu Buhari.

In August, the Nigerian military claimed to have launched an airstrike on Boko Haram headquarters in Sambisa forest, killing several commanders and seriously wounding leader Abubakar Shekau.
According to later reports, the attack also killed ten of Chibok’s daughters and injured 30 others.

Later that month, Boko Haram released a video of what appeared to be 50 Chibok girls, some of whom were holding babies, with a masked and armed spokesperson demanding the release of the imprisoned fighters in exchange for the girls’ freedom .

According to the masked gunman, some of Chibok’s daughters were killed by Nigerian airstrikes and 40 were married. The film was reportedly released on the orders of Abubakar Shekau, the leader of one of Boko Haram’s factions.

Boko Haram released 21 schoolgirls from Chibok in October after talks brokered by the International Committee of the Red Cross and the Swiss government between the group and the Nigerian government.

A child born to one of the girls and estimated to be around 20 months old by medical personnel was also released.

On November 5, a girl named Maryam Ali Maiyanga was discovered with a baby and rescued by the Nigerian army.

Army spokeswoman Sani Usman said she was discovered in Pulka, Borno state, while examining escapees from Boko Haram’s forest base in Sambisa. Bring Back Our Girls confirmed that she was among those kidnapped in Chibok.

Rakiya Abubakar, one of the abducted girls, was found by the Nigerian army on January 5, with a 6-month-old baby, while interrogating suspects detained during military raids in Sambisa forest. Her identity was later confirmed by the organization Bring Back Our Girls.

On May 6, another 82 schoolgirls were released following successful negotiations between the Nigerian government and Boko Haram, which included the exchange of five Boko Haram leaders.

Mustapha Zanna, a lawyer and owner of an orphanage in Maiduguri, led the negotiations. The agreement also included the intervention of the Human Security Division of the Swiss Foreign Ministry and the Red Cross.

3 million euros (about 3.7 million US dollars) in two duffel bags was paid as a ransom for the release of 103 girls between October 2016 and May 2017. According to a Nigerian government spokesperson, despite the fact that 83 girls were to be released in May 2017, one of them chose to stay with her husband rather than be released.

In June 2017, a photo of US President Donald Trump meeting two of Chibok’s schoolgirls went viral.

On June 27, US President Donald Trump met at the White House with Chibok schoolgirls Joy Bishara and Lydia Pogu, who were about to start their studies at Southeastern University in Florida. Bishara and Pogu presented Trump with a letter urging him to “keep America safe and strong.”

On January 4, the Nigerian army announced that it had rescued Salomi Pogu, another of the kidnapped girls.

According to Colonel Onyema Nwachukwu, she was rescued near Pulka, Borno. She was discovered with another young woman and her child.

As of February 2018, the majority of the released girls were enrolled at the American University of Nigeria, which is located not far from the original scene of the abduction in Chibok.

It was estimated that 13 girls were presumed dead, while 112 were missing.

Ali Garga, a Boko Haram militant, offered to release 40 of Chibok’s remaining schoolgirls in September 2018. When other Boko Haram members discovered what he was doing, he was tortured and killed.

The town of Chibok has never been the same since the infamous kidnapping of school girls five years ago, which captured worldwide attention.

In January 2021, an unknown number of girls escaped. Parkinson and Hinshaw published a book based on interviews with the girls, former activists, spies and government officials called “Bring Back Our Girls: The Astonishing Survival and Rescue of Nigeria’s Missing Schoolgirls” in 2021.

Much of the book was based on a diary kept by 24-year-old Naomi Adamu, one of the girls kidnapped and freed in 2017. Adamu described her experiences, including how they were subjected to daily Quran lessons and regularly beaten with rifle butts, rope, and wire.

Girls who refused to marry were not sexually abused; however, they were treated like slaves and forced to perform hard manual labor. She led a group of rebellious girls who refused to convert to Islam and were threatened with death and starvation by militants.

Borno State Governor Kashim Shettima called on all Muslims and Christians to participate in “three days of prayers and fasting” on May 9.

On the same day, Muslims in Cameroon urged their followers not to marry any of the girls if offered to them.

Additionally, Saudi Arabia’s Grand Mufti, Sheikh Abdulaziz Al al-Sheikh, joined other Muslim religious leaders in condemning the kidnappings, describing Boko Haram as misguided and determined to smear the name of Islam. . He said kidnapping is against Islam and it is forbidden to marry kidnapped girls.

Amnesty International estimated in 2015 that the Islamic terror group had abducted at least 2,000 women and girls since 2014, many of whom had been forced into sexual slavery.

Some have spoken of their capture at international human rights conferences. Boko Haram used the girls as bargaining chips in prisoner swaps, offering to release some of them in return for releasing some of their captured commanders.