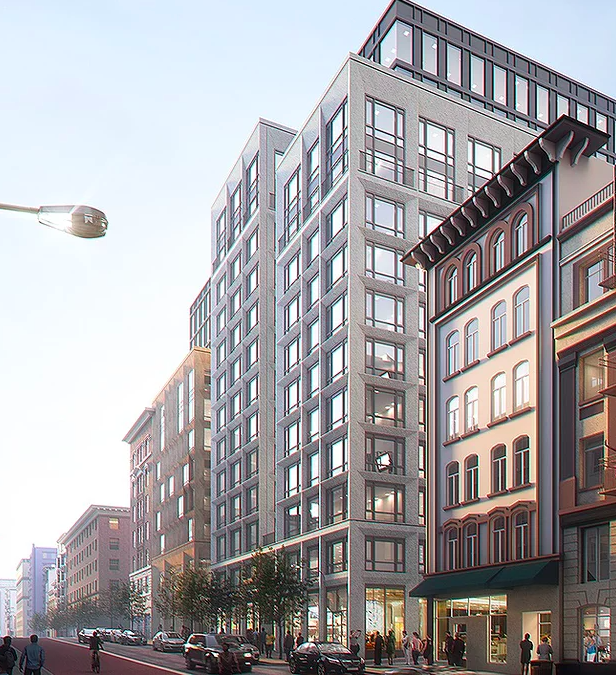 A technician’s dormitory in the Tenderloin? Or the end of the Yimby story?

The Board of Supes is back this week after a hiatus in August and will be grappling (this week or next) with a developer who wants to build 316 collective housing units at market price (i.e. dormitories for young people, singles and technicians). ) in the net.

The developer, working with a Christian Science church that exists on the site, initially proposed to build a 176-unit project with a few apartments large enough for families.

The family home has not “cracked”. This is quite a statement. So now we have this.

But Forge Development now says that a traditional housing development at market rate cannot get financing these days. This is an interesting message for the Yimbys, who insist that the main obstacle to more housing is the local regulation of land use: the previous project had community support and was approved by the Commission. planning, no problem.

Now it won’t be built, either because the developer can’t get funding or they just want to make more money.

Think about this message. Forge had full rights and no “Nimby” opposition. But the determining factor in what gets built in San Francisco isn’t, overall, delays in community input or approval. It is international speculative capital that decides where the highest return is. And more housing for families (much less affordable housing remotely) doesn’t seem to make a difference at the moment.

So now we have this tech dorm.

The planning commission, for reasons that defy logic, approved the plan in February, and the Tenderloin Housing Clinic and a nearby SRO hotel have both appealed to supes.

The sups do not usually overturn the decisions of the Planning Commission, but this one is going to be difficult.

I often find myself at odds with Randy Shaw, who founded and runs THC. He has attacked me for little apparent reason in the past and is often on the Yimbys’ side. He was a big supporter of former Mayor Ed Lee and helped create the Twitter tax break that was part of the tech boom that devastated working-class and low-income communities in San Francisco.

But in this case, Shaw strongly opposes this new accommodation. As he notes:

First, developer Forge Inc. has treated the residents and groups of Tenderloin with contempt. Forge ignored repeated requests from planning staff and commissioners to resolve their differences with the community; Unfortunately, Forge’s negotiating strategy of not working with the community was rewarded by the Planning Commission with the approval of the project. It’s as if some commissioners decided that they had done their best to get Forge to negotiate and, having failed to move the developer, they had no choice but to approve the project.

This is not how community outreach should work. A developer should not be rewarded for ignoring requests from the planning commission to modify projects to meet overwhelming opposition from the community.

Forge’s 450 O’Farrell project will be a two-year nightmare for tenants in adjacent supportive housing. The Pacific Bay Inn may need to be vacated or new locations suspended. The approval of the project was not accompanied by an analysis of the impacts of construction on the 1907 Pacific Bay Inn or on the very vulnerable residents who live there. These tenants are generally at home most of the day. If a project is to be built alongside them, their needs should be taken into account.

Why is San Francisco allowing a project that makes no sense for the community to move or downsize existing permanent supportive housing? There are three other permanent supportive housing sites adjacent to the planned project or across the street. All could lose residents during the long period of construction noise. Why does the city risk worsening its homelessness crisis for a project that does not meet the needs of the neighborhood?

All the good points.

But it gets more complicated. A law firm representing the Christian Science Church wrote a letter to supes saying that since the project will involve the rebuilding and expansion of the existing church, federal law requires the board of directors to approve it:

Currently, the church does not have a building that can adequately accommodate its religious exercise and has been seeking to build a new place of worship since 2013. This project, which includes a new church building and a Christian science reading room which will meet the religious needs of the Church, in addition to the 316 collective housing units, has suffered extreme and unreasonable delays in the City’s land use approval process, which have severely hampered the religious exercise of the ‘Church, as described below. We urge the Board to reject this appeal and maintain the Planning Commission’s conditional use approval. Failure to do so would potentially expose the City to years of litigation, substantial damages and attorney fees.

The previous project, approved by the city, also included a new church and a reading room. So the city didn’t actually interfere with any religious group – the church had a valid building permit four years ago and could have had anything it wanted.

The two sides agreed they would agree to an extension until September 14. Sometimes this happens if there is a chance that they will come to an agreement. It seems terribly unlikely here.

Maybe the sups should ask to see the numbers: what kind of return are lenders asking for? Maybe this project is a pointer – clear proof that Yimby’s tale makes no economic sense, as new construction will never bring prices down if the only new construction that can get funding is one whose town does. do not need.